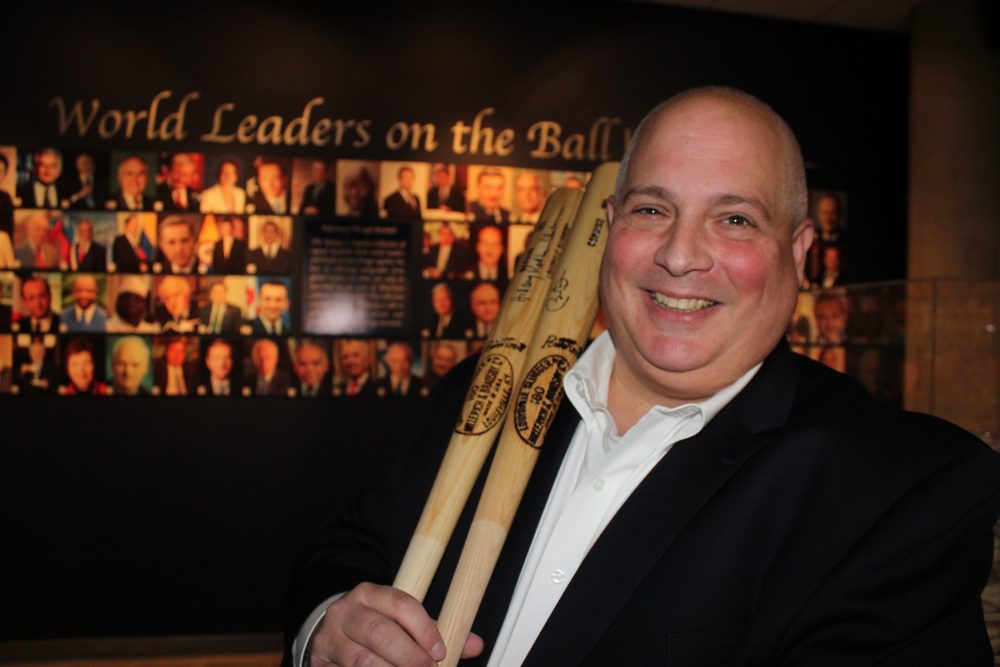 On March 19, 2013, as a rainy day turned to dusk, tens of thousands of people huddled together under multi-colored umbrellas on St. Peter’s Square at the Vatican. Then, just after 7 p.m., white smoke appeared through the chimney of the Sistine Chapel.

Lino Rulli and Father Dave Dwyer had the call from the Vatican for The Catholic Channel.

“You can actually see that the curtain is about to be pulled back. The window is about to be opened. And let’s take a listen to the name of the next pope.”

Four-thousand miles away, Randy Kaplan, a Jew from Long Island, was in his office in New York — he’s a lobbyist — watching CNN with his boss and a good friend. Randy’s always paying attention when a new head of state is announced.

“To me, that’s my Kentucky Derby or that’s my Super Bowl,” Randy says. “Absolutely.”

For 20 years, Randy has been trying to do something that sounds pretty simple. He wants to get a baseball signed by the pope. And for 20 years, he has failed.

“Very, very hard to infiltrate that inner circle,” Randy says. “I tried every mechanism which I know, and I don’t take no for an answer. So it’s very difficult for me to come to terms with, ‘It’s not going to happen.'”

But this time, Randy wasn’t taking any chances. Knowing that he was unlikely to get a sitting pope to sign a baseball, he instead started requesting signed balls from the cardinals most likely to become the next pope and…

“Before the smoke was rising from the chimney at the Vatican, I probably had about 20 of the cardinals out of about 25 or 30 who had a realistic chance,” Randy says.

Nobody expected Cardinal Bergoglio to be announced as Pope Francis, not even the two Catholic Channel announcers.

“I believe it’s fair to say the world is stunned,” Rulli said.

“This is a stunner,” Father Dwyer said.

But Randy Kaplan had already sent Cardinal Bergoglio — now Pope Francis — a baseball to be signed. It had been returned to sender.

So, Randy still didn’t have a baseball signed by the pope. But he wasn’t about to give up. With help from a friend, who happened to be a cardinal, he sent a couple more baseballs to the pope’s personal secretary. But he wasn’t optimistic.

“Getting the actual pope to sign as pope — that’s hitting the jackpot for autograph collectors,” Randy says.

Randy Kaplan’s not just any autograph collector. His quest is to collect baseballs signed by all of the heads of state and world leaders.

So, how did a guy from Long Island dream up that idea?

A Collector Since Childhood

Growing up in the ’70s, Randy collected the kinds of things kids were collecting back then: wacky package stickers, baseball cards…

“Universal Monsters licensed with Aurora Plastics company in Hempstead, New York, back in the ’60s and ’70s,” Randy explains. “And they were the hottest thing since sliced bread for kids.”

When Randy was in high school, he snuck backstage at rock concerts, hoping to catch a glimpse of one of his idols. And because he was close to Manhattan, Randy met lots and lots of famous people.

“I asked for a couple of autographs here and there throughout, but nothing — nothing crazy,” Randy says.

In April of 1993, things started to get decidedly crazier. Randy was on a business trip to Houston, and he decided to go to an Astros game. The woman sitting next to him mentioned that former President George Herbert Walker Bush and his wife, Barbara, came to games whenever they were in town.

“He was just out of office, a couple of months, and I’ve always been a huge admirer of his,” Randy says. “And I did not think that they would be coming on that particular night, because there was a failed assassination attempt on the former president just a couple of days prior in Kuwait. But, lo and behold, sure enough, after the second inning begins, here comes George and Barbara Bush. And they sit down — literally a row in front of me.

“So I’m, like, ‘This is amazing.’ Because as a kid in my teens and in my 20s, I had met everybody you could imagine — the rock stars, as I mentioned, the sports stars. I was never moved so much as when I met a president. I had him sign my scorecard. And I remember bouncing off the walls.”

A couple of weeks later, Randy was visiting the Baseball Hall of Fame in Cooperstown, and he saw a collection of baseballs – they had all been first pitches thrown by sitting presidents.

“And I said to myself, ‘Oh, my god. What an amazing idea it would be to have presidents and world leaders sign baseballs and start a collection and share it with the world,'” Randy recalls.

“Republican, Democrat, Communist, Independent. It doesn’t matter. I don’t even think about politics when I pursue my collection. My mantra and my motto is ‘diplomacy through baseball.”- Randy Kaplan

Randy thought about the idea for three years. He wasn’t quite sure where to begin. Then, in 1996, he was working as the government affairs director for a large trade association, and then-President Bill Clinton came to give a speech.

Randy arrived three hours early. Secret Service agents were still doing their sweep. He got a seat near the front. As soon as the talk was over, he hopped into the receiving line.

“And I accomplished my goal. I got my baseball signed by Bill Clinton,” Randy says. “It was wonderful. It was a great way to start.”

“Tell me the story of how you got the Gorbachev ball,” I say.

“Ah, god, this is a wonderful story,” Randy says.

It was 1996, five years after the Soviet Union dissolved. Gorbachev had written a memoir and scheduled two book tour stops in the United States.

“So I knew I had to get to the book signing early,” Randy says. “I also knew that I needed a trick up my sleeve, because security was gonna be extremely tight.”

Luckily, Randy’s landlord was Russian. Randy asked him to write out a Russian phrase – phonetically — on the back of a business card. Randy brought the card with him to the book signing.

“And I practiced all morning,” Randy says. “As I approached the table, Mr. Gorbachev smiled. And as he’s signing the book, I pull the baseball out. Security jumped on my arms to take the baseball away and push me away.”

Through all the commotion, Randy kept speaking directly to the former Soviet leader.

“The concept was, ‘Mr. Gorbachev, it’s a pleasure to meet you. Would you be kind enough to sign my baseball and take a photograph with me?'” Randy recalls. “President Gorbachev stood up, pushed the security guard out of the way, retrieved the baseball from my hand, signed it, stood up and bowed to me and sat down. I was so proud of that.”

Randy says getting Gorbachev to sign one of his baseballs so early in his quest really gave him the momentum to keep going.

“You’re not partisan with this at all, are you?” I ask.

“Absolutely not,” Randy says. “Republican, Democrat, Communist, Independent — it doesn’t matter. I don’t even think about politics when I pursue my collection. My mantra and my motto is ‘diplomacy through baseball.'”

Randy hopes one day his collection will be displayed at the headquarters of the U.N., and he wants people who see it to understand that we may have disagreements, but that we all live on the same planet. And countries that feel like they’re on the other side of the world, well, they’re really not far away at all.

“And this way we can get the world to come together and hopefully be a better place,” Randy says. “‘We have different ideology, but we share the same biology.'”

Randy laughed and admitted that he stole that phrase from a Sting song.

But make no mistake: Randy Kaplan cares deeply about who wins major elections, in the U.S. and around the world.

“The average person walking down the street, they’re worried if the Yankees won or the Mets won. They’re not worried about who the new French president’s going to be,” Randy says.

(Don’t worry. Before votes were even cast, Randy had collected baseballs signed by both Emmanuel Macron and runner-up Marine Le Pen.)

Randy says he spends 20 to 30 hours a week researching world leaders and prospective world leaders. That’s how he got signed baseballs from Barack Obama and Donald Trump, long before either had announced their candidacy for president. And he never goes anywhere without a bag filled with half-a-dozen baseballs and some pens. He says you never know who you’re going to run into.

“I sat next to Henry Kissinger on a plane one day by sheer chance, coming home on the shuttle 20 years ago,” Randy says. “My wife and I were having dinner one night. We ran into a couple of foreign leaders — the former president of Benin Mathieu Kerekou, who’s now deceased.”

OK, so it’s quite possible that I’ve sat in a restaurant with the former president of an African country I can’t even point out on a map. But Randy’s not like me. He’s researched all the world leaders. There’s no country too small or too far-flung.

“I had to point to it and show him what to do, where to sign it,” Randy says.

As news of Randy’s collection has spread, more and more people have been offering to help. He now has 350 baseballs signed by world leaders, plus about a thousand more signed by prospective future world leaders. He keeps them at a secured storage facility and only gets to see his collection when a museum puts it on display.

Despite all his successes, Randy was still waiting for his “holy grail” — a baseball signed by the pope.

And then one day, about two months ago…

“The mail comes. I didn’t even have to open it,” Randy says. “I knew the ball was signed. I had this unbelievable feeling inside. I opened it up. The ball is beautifully signed, ‘Francisco.’

“I am still bouncing off the walls and beaming about this one. To think that — here’s how I look at this. The pope held the baseball in his hand. He knows about my collection. He knows all the other people who’ve signed it. That’s very meaningful to me.”

It’s probably a stretch to suggest that the pope signed Randy’s baseball because he likes the idea of bringing the world together through baseballs signed by world leaders.

Then again, that seems like just the kind of message Pope Francis would support.

And besides, Randy Kaplan says, a baseball signed by the pope is one step closer to having them all.

“The pope, let’s face it, one of the toughest and most desirable signatures on the planet,” Randy says. “Right up there with the Chinese leader and Vladimir Putin, both of which I would love to have. If anybody’s listening and they have a relationship with either Vladimir Putin or the current Chinese leaders, please do get in touch with me.”