Collecting a lineup of famous signatures 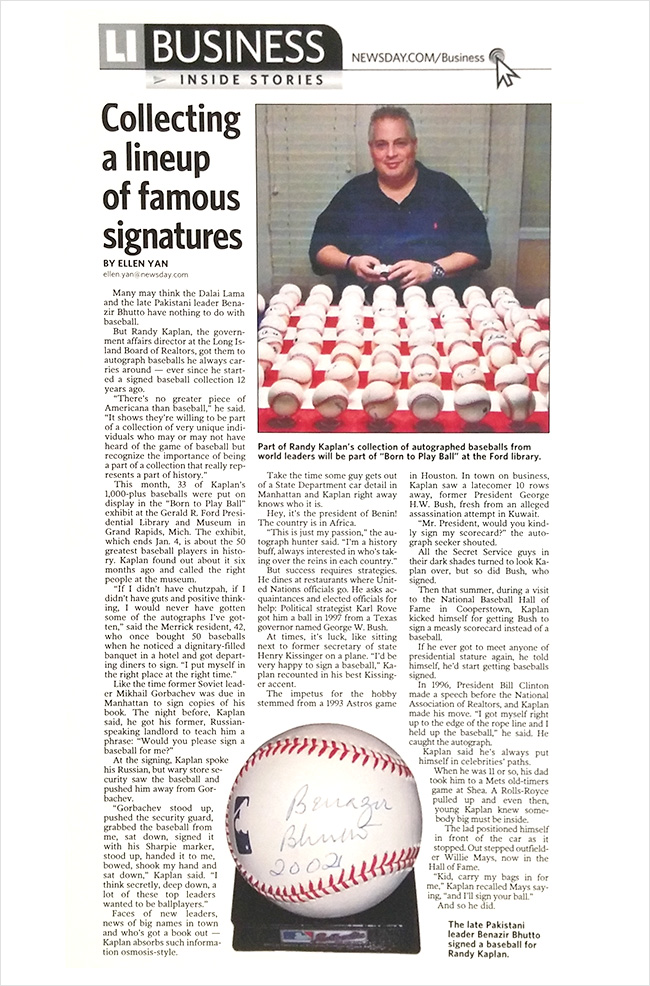 Many may think the Dalai Lama and the late Pakistani leader Benazir Bhutto have nothing to do with baseball.  But Randy Kaplan, the government affairs director at the Long Island Board of Realtors, got them to autograph baseballs he always carries around – ever since he started a signed baseball collection 12 years ago.

“There’s no greater piece of Americana than baseball,” he said. “It shows they’re willing to be part of a collection of very unique individuals who may or may not have heard of the game of baseball but recognize the importance of being a part of a collection that really represents a part of history.” This month, 33 of Kaplan’s 1,000-plus baseballs were put on display in the “Born to Play Ball” exhibit at the Gerald R. Ford Presidential Library and Museum in Grand Rapids, Mich. The exhibit, which ends Jan. 4, is about the 50 greatest baseball players in history. Kaplan found out about it six months ago and called the right people at the museum.

“If I didn’t have chutzpah, if I didn’t have guts and positive thinking, I would never have gotten some of the autographs I’ve gotten,” said the Merrick resident, 42, who once bought 50 baseballs when he noticed a dignitary-filled banquet in a hotel and got departing diners to sign. “I put myself in the right place at the right time.”

Like the time former Soviet leader Mikhail Gorbachev was due in Manhattan to sign copies of his book. The night before, Kaplan said, he got his former, Russian-speaking landlord to teach him a phrase: “Would you please sign a baseball for me?”

At the signing, Kaplan spoke his Russian, but wary store security saw the baseball and pushed him away from Gorbachev.

“Gorbachev stood up, pushed the security guard, grabbed the baseball from me, sat down, signed it with his Sharpie marker, stood up, handed it to me, bowed, shook my hand and sat down,” Kaplan said. “I think secretly, deep down, a lot of these top leaders wanted to be ballplayers.”

Faces of new leaders, news of big names in town and who’s got a book out – Kaplan absorbs such information osmosis-style.

Take the time some guy gets out of a State Department car detail in Manhattan and Kaplan right away knows who it is.

Hey, it’s the president of Benin! The country is in Africa.

“This is just my passion,” the autograph hunter said. “I’m a history buff, always interested in who’s taking over the reins in each country.”

But success requires strategies. He dines at restaurants where United Nations officials go. He asks acquaintances and elected officials for help:

Political strategist Karl Rove got him a ball in 1997 from a Texas governor named George W. Bush.

At times, it’s luck, like sitting next to former secretary of state Henry Kissinger on a plane. “I’d be very happy to sign a baseball,” Kaplan recounted in his best Kissinger accent.

The impetus for the hobby stemmed from a 1993 Astros game in Houston. In town on business, Kaplan saw a latecomer 10 rows away, former President George H.W. Bush, fresh from an alleged assassination attempt in Kuwait.

“Mr. President, would you kindly sign my scorecard?” the autograph seeker shouted. All the Secret Service guys in their dark shades turned to look Kaplan over, but so did Bush, who signed.

Then that summer, during a visit to the National Baseball Hall of Fame in Cooperstown, Kaplan kicked himself for getting Bush to sign a measly scorecard instead of a baseball. If he ever got to meet anyone of presidential stature again, he told himself, he’d start getting baseballs signed.

In 1996, President Bill Clinton made a speech before the National Association of Realtors, and Kaplan made his move. “I got myself right up to the edge of the rope line and I held up the baseball,” he said. He caught the autograph.

Kaplan said he’s always put himself in celebrities’ paths. When he was 11 or so, his dad took him to a Mets old-timers game at Shea. A Rolls-Royce pulled up and even then, young Kaplan knew somebody big must be inside. The lad positioned himself in front of the car as it stopped. Out stepped outfielder Willie Mays, now in the Hall of Fame.

“Kid, carry my bags in for me,” Kaplan recalled Mays saying, “and I’ll sign your ball.”

And so he did.