WSHU – The Baseball Diplomat: Meet The Guy Who Got 181 World Leaders’ Autographs 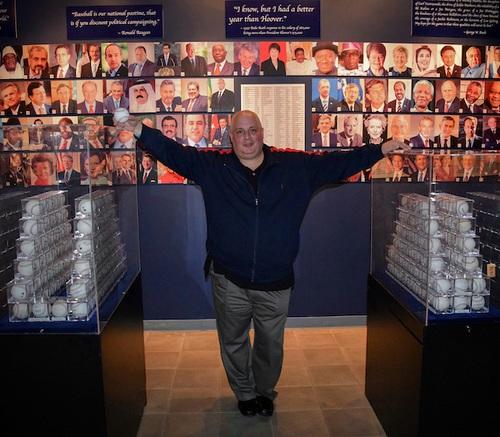 It’s hard enough to get baseball players at a ballpark to sign a ball. Imagine what it took to get Nelson Mandela or Mikhail Gorbachev’s signature on one, but that’s exactly what one Long Island man has done.

Randy Kaplan has a collection of baseballs signed by 181 world leaders. It’s currently on display at the Cradle of Aviation Museum on Long Island. And every one of those baseballs has a story…

“Margaret Thatcher, of course the Iron Lady. Here’s another one that I treasure, too. Angela Merkel. I was very happy to get her. She’s a tough one,” Kaplan says.

Kaplan has always been a collector: baseball cards and comic books as a kid, movie and rock star autographs as a teen.

Kaplan, who is Government Affairs Director and Senior Lobbyist with the Long Island Board of Realtors, got the idea for his collection after a chance meeting with former President George H.W. Bush and Barbara Bush at a ballgame, after which he had them sign a scorecard.

“Went back to my hotel room and I thought about this, and I said I just met someone who is going to go down in history. Not a rock star, not a sports star, not a movie star, but a real piece of history. So I kicked myself afterwards saying I should have gotten a ball signed. I’m at a baseball game, it would have made sense.”

A short time later, Kaplan was at the Baseball Hall of Fame and saw a collection of balls that presidents had thrown out as a first pitch.

“So at that point I put two and two together, and I said I would love to start a collection of signed baseballs from world leaders and presidents and have them on exhibit someday in a museum.”

“One of the ideas that I had with the original concept was to try and bring together the world to sign baseballs. What’s more American than a baseball? Then it dawned on me the same time as I was thinking up a way of documenting this, diplomacy through baseball.”

Since then Kaplan has gotten signatures from some of the most influential people in history, including figures like Nelson Mandela.

“It’s a beautiful signature, highly unique, as well as being one of the most desirable signatures in the world.”

Kaplan got a little help in getting Mandela’s signature from Queens Congressman Gregory Meeks, along with a warning from the great man: “I better not see this on eBay!”

Getting a signature requires planning, luck, and a little bit of chutzpah. For example, getting Gorbachev to sign, Kaplan went to a book signing with a baseball and a phrase in Russian he memorized phonetically.

“When it was my turn, I simultaneously started reciting the passage, and pulled the baseball out of my pocket. Well, security pushed me away and tried to grab the baseball.  Mr. Gorbachev stood up, pushed the security guard away, took the baseball in his hands, sat down, signed it, stood up, bowed, handed me the ball, and shook my hand.” “What was the phrase?” “The phrase was: It was a pleasure to meet you sir. Would you be kind enough to take a photograph and autograph this for my collection?”

“The top two people right now for me would have to be Vladimir Putin, I’ve been trying to get him for a long, long time, and the former president of Haiti, Jean Bertrand Aristide. And if you’re listening, President Sarkozy, I’ve sent you numerous baseballs to France. Please, please sign one of the baseballs I’ve sent you and send it back to me.”

The Kaplan Collection has been displayed at the LBJ, Nixon, Ford and Clinton Presidential Libraries and the Herbert Hoover Museum.

Kaplan is not taking any chances: he has signed balls from Hillary Clinton and Donald Trump, and their running mates.

“World Leaders on the Ball” is at the Cradle of Aviation Museum through November 8 – which is Election Day, appropriately enough. 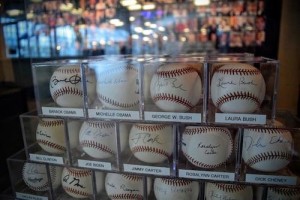 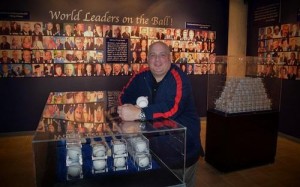