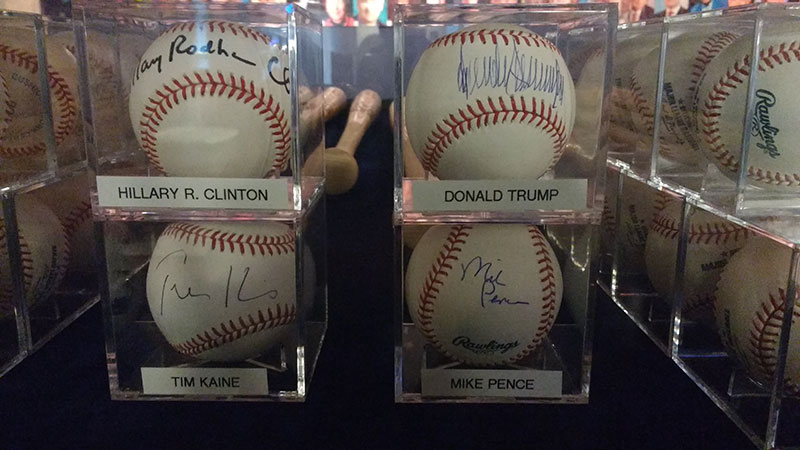 Randy Kaplan never leaves home without at least half a dozen brand new, official major league baseballs and one wooden Rawlings baseball bat because, he says, you never know who you’re going to run into.

Kaplan has collected over 300 baseballs signed by various world leaders including Margaret Thatcher, Barack Obama and Panamanian President Juan Carlos Valera. Several of these signatures have been collected through Kaplan’s own chance encounters with important people. He got President Obama’s signature one night after running into the President smoking a cigarette outside of Capitol Hill while he was still a senator.

There are 181 of his baseballs on exhibit in the Cradle of Aviation Museum, with a spotlight on balls signed by nearly every contender from both major parties in this year’s election, including signatures from Donald Trump, Bernie Sanders and Hillary Clinton.

While one-of-a-kind, Kaplan’s baseballs are among many collections of political items.

One of the biggest independent manufacturers of political buttons in the country and an avid button collector himself, Mort Berkowitz says the market for political items skyrockets during election years, as campaign materials such as buttons and posters flood the market and collectors try to get as much as possible.

“During this year, I already designed over 900 different styles and buttons for all the candidates running,” Berkowitz said.

Berkowitz specializes in comical and over-the-top button designs. His favorite design this year features a picture of Trump, his famous golden pompadour photoshopped to outrageously large and unruly proportions. Under the picture are the words, “We shall overcomb.” Berkowitz says Trump is his most popular seller this year with over 18,000 Trump buttons sold.

“Buttons are definitely the most popular item,” Michael McQuillen,  founder of Political Parade, a website for the selling and collecting of political buttons, said. “They used to been given away as premium items with cigarettes or packs of gum.”

“I started collecting because I was a Bernie supporter for one, but I thought it was really cool how his followers were really passionate about his campaign and him in general,” Miller said, “I think it’s a nice historical investment to tell the story of what went on.”

Political Memorabilia isn’t just a nice momento for supporter, it can also serve as a simple and effective tool during campaigns for candidates to promote their ideals.

During the 1960 presidential election a John F. Kennedy supporter responded to attacks from Nixon accusing the young candidate of being too young and weak to run the country by producing simple brass pins replicating a PT-109 ship with the inscription “Kennedy 60.”

Kennedy served on a PT-109 that was rammed and sunk during World War II. Despite his resulting injuries he managed to swim himself and another survivor three miles to safety. Kennedy was awarded a Naval Medal of Honor for his actions and the PT-109 pins were a representation of the young candidate’s toughness and bravery.

“Kennedy just loved them,” Victor Mongeau, owner of Legacy Americana, an online store specializing in historical memorabilia, said. “He even carried a few in his pocket to hand out to people at events.”

These pins can be bought for around $40 on Mongeau’s website.

While most items in political memorabilia collections are bought and are often sold or traded.  Randy Kaplan has never purchased a signed baseball. All of his signatures were collected either by himself or with the help of colleagues, and he hopes never to sell his collection.

“You can buy a ball signed by Mickey Mantle for $600 to $800 online somewhere,” Kaplan said. “There’s no place to look and see what a baseball signed by Nelson Mandela goes for.”

“The Kaplan Collection” will be on display at the Cradle of Aviation museum in Garden City until Election Day, November 8, when Long Island and the rest of America will hit the polls to choose America’s next leader.