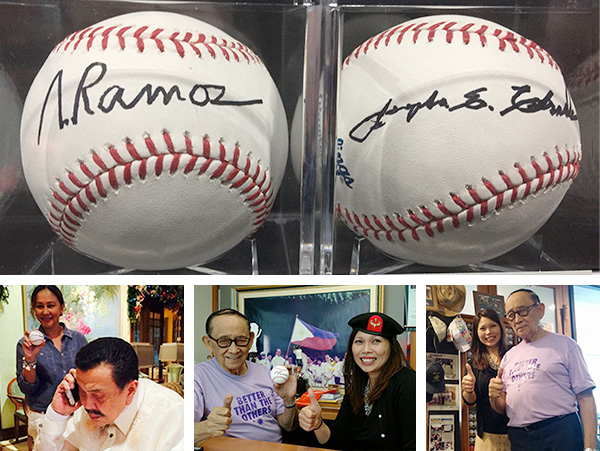 One thing I have learned over the past few decades of collecting signed baseballs from world leaders and heads of state is that almost everyone knows someone who can potentially help you get the signatures that you desire. One of my mottos in life  is always talk about what it is you are passionate about and success will come. Life is all about creating and fostering relationships.

Last year at a neighborhood park with my sons – I was speaking with one of the other kid’s dad and we starting talking sports. It wasn’t long before I brought up my passion for collecting signed baseballs from world leaders when suddenly he said – “You wouldn’t happen to want the signatures of any of the former Presidents from The Philippines, would you?” I almost fell down as he proceeded to tell me that a friend of his from Boston is close to a few of the former Filipino leaders, including former Presidents Joseph Estrada and Fidel Ramos, both of whom I had been trying to get to sign baseballs for my collection for almost 20 years.

Lo and behold, he introduced me to his friend in Boston and within a very short time she travelled to the Philippines and personally met with both of the aforementioned leaders. They were very receptive to add their signed baseballs to my collection. Coincidentally, President Fidel Ramos collects autographed golf balls from all the famous folks he has played a round of golf with including golf professionals, world leaders and celebrities.

The good news doesn’t end there as my new friend in Boston is actively trying to acquire signed baseballs for me from current President Duterte and former President Benigno Aquino III.